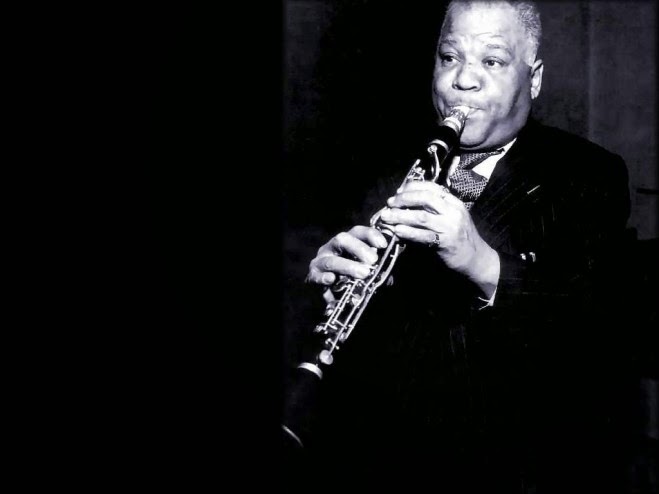 This past month I read two books about the great clarinetist and soprano saxophonist Sidney Bechet. I read John Chilton's biography, "Sidney Bechet The Wizard of Jazz" and Bechet's autobiography, "Treat it Gentle".

Listen to this NPR Jazz Profile to learn more about Bechet's life and music. 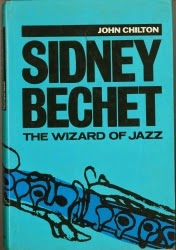 What I enjoyed about Chilton's biography of Bechet was the historic thoroughness, and the ability to examine Bechet's life from different angles. In an autobiography, the text is more personal and is often full of humorous anecdotes, yet you only receive Bechet's point of view. Chilton received accounts from various sources, adding to a full view of Bechet's personality- gentle and sweet, or mean and ferocious.

Bechet was a self taught musician. His brother played trombone and clarinet, and when his brother was at work Bechet would often go into the attic when no one was home and start playing the clarinet. One day his mom caught him there, and tried to convince Bechet's brother that Sidney should have the clarinet since he was so naturally talented. Bechet received his brother's clarinet for Christmas, and practiced constantly. Yet, Bechet never chose to learn to read music because he thought that reading got in the way of truly feeling the music.

One story I found particularly humorous was that Bechet would often keep a clarinet in his back pocket, enter a bar, size up the band, and 'duel' with the house band.

Once the tenor saxophonist Coleman Hawkins made a claim that people from New Orleans couldn't really play. This upset Bechet, who grew up in New Orleans, and he challenged Hawkins to a 'bucking contest' where the two musicians would 'duel' to see who really was the top musician. Bechet came up with so much rhythmic, diverse, and original content that Hawkins couldn't keep up, and he put his horn away and started walking out of the club. Bechet followed him out of the club and continued playing all the way down the street!

Bechet's playing has influenced an entire legacy of musicians, from Johnny Hodges to Wayne Shorter. 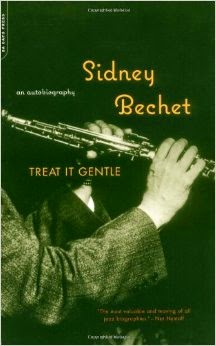 Bechet's autobiography was not only thought provoking, but it was profound, with many memorable quotes. Bechet weaved stories from his ancestors, childhood, and touring with stories of his friends and fellow musicians. Bechet claimed, "I wouldn't tell all this in a story about the music, except that all I been telling, it's part of the music. That man there in the grocery store, the Mexican, the jail- they're all in the music. Whatever kind of thing it was, whenever it happened, the music put it together."

Bechet's life was centered around music, and he continuously emphasized the importance of making the music sound human with growls and bends to create the human voice.  Bechet is known for his vibrato, but even against critics panning his vibrato he kept it because it was his own voice.

Bechet claimed that he enjoyed how people look up to him, but admitted that he is a product of his environment: "Most people, they think they make themselves. Well, in a way they do. But they don't give enough credit to all the things around them, things they take from somebody else when they're doing something and creating it."

Bechet summarizes why music is so important to him: "No matter what else is happening, the music is the thing to hold to, and it's all mine in a way of speaking: I can be off alone somewheres, I can be sitting here and I can be sad and lonely, but all I got to do is think of some melody and I'm feeling better off."

Bechet explained his thoughts on music: "But you know, no music is my music. It's everybody's who can feel it... You got to be in the sun to feel the sun. It's that way with music too." Listen to Bechet playing "St. Louis Blues":

Final Thoughts:
When I read biographies I realize that these jazz musicians are not just 'important figures', but they are quintessentially human. Bechet said, "Me, I want to explain myself so bad. I want to have myself understood. And the music, it can do that. The music, it's my whole story." "You gotta mean it, and you gotta treat it gentle".

What is your favorite jazz biography or autobiography?