Recently I finished reading Miles Davis's autobiography, "Miles". Building off of my previous 'jazz book club' posts on Chet Baker, Herbie Hancock, and Sidney Bechet, I wanted to share some thoughts about the book as well as some music by Miles Davis. 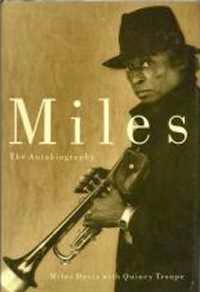 Miles Davis's book lives in Miles Davis's attitude - blunt, musical, but humorous. I recommend this book to not only jazz fans, but to anyone that is creative. Miles Davis created and revolutionized music many times, and hearing some of his thoughts could be of some inspiration to anyone. (The language in the book is definitely for older readers though.)

Listen to Miles Davis play with Charlie Parker in "Bird of Paradise":

I think Miles Davis is one of those jazz musicians, just like Charlie Parker, that tends to make people want to play jazz. His solos are melodic, and he leaves a lot of space in his music. He's one of the first names you learn, and his discography is immense.

Listen to Miles Davis with Sonny Rollins in "Oleo":

Miles Davis is known for being a great bandleader. Many of his sidemen went on to being their own influential bandleaders. His 'first great quintet' included Philly Joe Jones on drums, Red Garland on piano, Paul Chambers on bass, and John Coltrane on tenor saxophone. The quintet has some of my favorite albums, "Cookin'", "Steamin'", "Workin'", and "Relaxin'".

Listen to the 'first great quintet' play "Airegin" from "Cookin'":

Listen to "I Could Write a Book" from "Relaxin'":

One of the most sold jazz albums of all time is "Kind of Blue" by Miles Davis. This album features Jimmy Cobb on drums, Bill Evans and Wynton Kelley on piano, Cannonball Adderley on alto saxophone, John Coltrane on tenor saxophone, and Paul Chambers on bass. "So What" is a song taught to many beginning improvisers because of its 'modal' chord structure. In "Miles", Miles talked about how this group was extremely special to him, and how he loved its sound.

Listen to Miles Davis's "So What" from "Kind of Blue":

"Blue in Green" inspired me to start this blog:

I enjoy how Miles picked many different songs throughout his career that have now become standards. Standards are songs a sort of "songbook" for jazz musicians, with hundreds of songs part of the 'repertoire' to know.

Listen to "Someday My Prince Will Come":

Miles Davis collaborated with composer and arranger Gil Evans, and considered him one of his closest friends throughout his life. His work with Gil Evans is often considered "Third Stream", because it blended classical music and jazz.


Listen to "Boplicity" from "Birth of the Cool":

Listen to "Concierto De Aranjuez " from "Sketches of Spain":

Miles Davis went on to form his 'second great quintet' which included Tony Williams on drums, Herbie Hancock on piano and keyboard, Ron Carter on bass, and Wayne Shorter on saxophone. I have always loved this group because of the intense sound. In addition to reading "Miles", I recommend reading "Possibilities" by Herbie Hancock. Herbie's excited words describe the camaraderie of the group well.

Miles Davis was an innovator to electric music, and experimented with keyboards, electric guitars, and different effects. "Bitches Brew" was Miles Davis's first 'gold album', and blended jazz and rock music. "Jazz fusion" is when a musician combines jazz with other genres such as rock.


Miles Davis went into reclusion during a few years of his life, and was not seen by the public for years. In "Miles" he admits he didn't even pick up the trumpet during this period of his life. "The Man with the Horn" was his first album out of reclusion and fused rock, pop, funk, and jazz.

Listen to "The Man with the Horn":


"Doo-Bop" was Miles's last studio album. This album was released after Davis died, but featured Miles Davis's interest in hip-hop music. It's interesting to hear how music history has taken so many of the sounds and ideas from Miles Davis. Right now, in 2015, hip-hop jazz is being played by people like Robert Glasper.


Listen to "The Doo-Bop Song":

Miles Davis had many live albums in addition to these studio albums. These live albums really pay testament to the fact that Miles's bands were always spontaneous and truly improvising. Miles made many live recordings, which resulted in a massive amount of live albums.

Listen to "The Mask" from "Live at the Fillmore East":

Listen to "If I Were A Bell" from "Live at the Plugged Nickel":

Miles Davis was also an artist, and later in life painted quite a few paintings. Last year I read "Miles Davis the Collected Artwork" and admired his modernistic paintings. I actually saw some of his artwork displayed at the Montreal Jazz Festival last year. 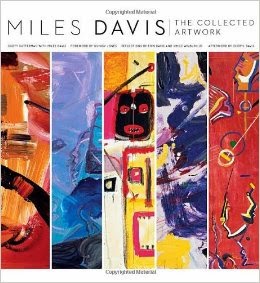 Miles Davis cites Clark Terry as a musical mentor to him. Clark Terry recently passed away, and was himself a prolific trumpeter. To learn more about Clark Terry, read this New York Times article. To hear his music, listen to this NPR podcast.

Leave aside his lifestyle, his life choices, his personality, his mistakes - whatever you may hold against him - Miles was truly an innovator. His work continues to inspire all of us, and we are lucky he left so much with us. Miles's music truly makes us all smile.

Listen to "Circle" from "Miles Smiles":

The blog cannot fit everything Miles ever created, but I urge you to check out his discography and discover some new music.

As always, please read my jazz poetry blog, "Without a Poem", where I improvise a new poem everyday. I also have a drawing and song of the day, so stay updated! Miles inspired my poem, "Circle" and Clark Terry inspired my poem, "Mumbles" this week.

What are some of your favorite Miles Davis albums?