This past weekend proved to be a true gemstone. I had the opportunity to go to two free local jazz festivals: the Hyde Park Jazz Festival and the Cambridge Jazz Festival. With the amazing talent I witnessed, I wanted to share some music to highlight the wide variety of jazz in the Boston area.

The acts that I saw at the Hyde Park Jazz Festival included the John Funkhouser Quartet and the Fernando Brandao Quintet.


John Funkhouser is a jazz bassist and pianist that plays a variety of styles from jazz to Brazilian to funk to rock and blues. His set at the Hyde Park Jazz Festival included Thelonious Monk's "Little Rootie Tootie" as well as his own original compositions.

A standout of the set was his closer, the groove-based "Rhinoceros," which seemed to imitate the sound of a rhino stomping on the ground with rhythmic hits and a classic Rhodes keyboard sound.

Fernando Brandao is a jazz and classical flutist from Rio de Janeiro, Brazil. His music consisted of a wide variety of music from South America, including sambas, bossa novas and churros. Brandao's set included many originals that he wrote for members of his family, which created a nice narrative to the concert.

It was exciting to see and hear Brandao play a wide variety of different flutes, from the standard flute to the alto flute and even the bass flute. The use of these different flutes created a lush, singing quality to complement each specific song.

Eguie Castrillo is a Latin jazz percussionist from Puerto Rico. A great timbales player, Eguie melds high energy mambos and salsas together to create a powerful and fresh take on the Latin American songbook.

Joanne Brackeen is a jazz pianist and composer. Well known as the first woman to play with Art Blakey's Jazz Messengers, Brackeen showcased her personal style and vibrant compositions in a solo concert. Listen to Joanne Brackeen on NPR's Piano Jazz.


Laszlo Gardony is jazz pianist originally from Hungary. Gardony's performance at the Cambridge Jazz Festival included music from his latest album "Life In Real Time," which features his sextet. Gardony's original compositions and arrangements from this album are not only energetic, tuneful and toe-tapping; they are full of rhythmic vitality and soul.


Ron Savage is a jazz drummer and percussionist as well as the co-founder of the Cambridge Jazz Festival. Nnenna Freelon is a jazz vocalist, composer, and producer hailing from Cambridge. Together, Savage and Freelon created a bluesy, tuneful set with standards to celebrate the centennial of Billie Holiday.


Listen to Ron Savage play, "It's Easy To Remember":

From "All Of Me" to "What A Little Moonlight Can Do," Savage and Freelon paid tribute to Lady Day in an original way. The musicians captured the essence of the Billie Holiday even while playing her songbook in a completely different style, such as arranging her songs in a reggae feel.

Final Thoughts:
I wanted to share music from these musicians because I think there is this misconception that going to see live music is expensive. Live music can be seen on a budget or even free: if you live in Massachusetts  MassJazz and JazzBoston both have listings of great local and free events. Also, Bostix lists discounts for Boston area concerts. Hearing jazz live is what makes the music shine, like a true gemstone. 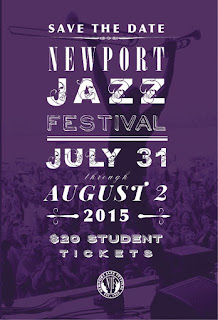 As a Newport Jazz Festival Student Ambassador, I am very excited for this year's festival (which is next weekend). Make sure you take advantage of the $20 student tickets. WGBO is also offering busses to and from Berklee to the festival for anyone to make travel simple. The schedule for all three days is available online as well as on the Newport Jazz app. No matter what level of jazz fan you are, old or new, this is a beautiful way to spend the summer. Read about my adventures at the 2014 Newport Jazz Festival: Day 1, Day 2, Interview with Shelly Berg.
Please visit my jazz poetry blog, "Without a Poem", where I improvise a new poem everyday! I also share jazz music and art there, so stay tuned! Seeing the Laszlo Gardony Sextet inspired my poem, "Summertime."