Today was my second day at the Detroit Jazz Festival. With over twelve straight hours of experiencing live music, there have been many bright moments to share.

Day 2 at the Detroit Jazz Festival


Next, I caught Anat Cohen's 'Celebrando Brazil' from Rio to Minas. Originally from Israel, Cohen melds her native influences with her love of Brazilian music as well as traditional swing music.


One highlight of the day was seeing Gordon Goodwin's Big Phat Band. I was taken away from the enormous sound the band creates, as well as Gordon's masterful compositions. My favorite piece was "Back Row Politics", which comedically featured the trumpet section dueling with the flutes in the reed section.


Rudresh Mahanthappa paid tribute to Charlie Parker with a series of original compositions at the Detroit Jazz Festival. What's amazing is that even while paying tribute, Mahanthappa never sounds like Parker. In fact, he has his own defined phrasing, sound and time-feel.

Following, in the interview with Eddie Daniels and the Wondertwins both speculated the outcome of the Benny's Threads performance from opening night. The ending thought was that by utilizing original compositions, world-class improvisers, spoken word, clothing and dance, Goodman's legacy was honored by moving ahead, just as Goodman would have wanted.


Next, I saw the Steve Turre/ Rahsaan Roland Kirk birthday celebration with special guest James Carter. Kirk was known for playing multiple instruments, often all at once. Turre admitted that there had to be three horn players on the stage to do what Kirk could do as a single person. A highlight of the set was the Kirk song, "Bright Moments", which imparted Kirk's wise words that each moment of life is bright and joyful.


Paquito D'Rivera mixed classical and jazz music while playing with special guest Anat Cohen. I have seen D'Rivera multiple times, but his energy and passion for exciting the audience always captivates.


It is always a pleasure to see the Maria Schneider Orchestra. At this particular concert, Schnieder brought out some older pieces from her album Sky Blue as well as recent compositions from her latest album The Thompson Fields. Each soloist improvised with a narrative matching the original storyline, from imitating bird calls to storms. 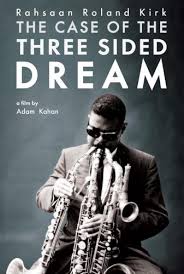 Closing off the night was a screening of "Rahsaan Roland Kirk - The Curse of the Three Sided Dream". Following the screening, filmmaker Adam Kahan, wife Dorthaan Kirk, musician Steve Turre and poet Betty Neals participated in a Q&A. What was most interesting to learn about Kirk was that everything he did was based on his dreams - from playing three saxophones at once to changing his name, his dreams guided him through life.

Final Thoughts:
Music aside, some of the brightest moments I have witnessed at the festival have been the kind exchanges between old and new friends in this wonderful city.

Please visit my jazz poetry blog, "Without a Poem", where I improvise a new poem everyday! I also share jazz music and art there, so stay tuned! Today inspired my poem, "To be me".

More posts on my experiences are forthcoming.