This week I wanted to share some videos by pianist Oscar Peterson as a source of inspiration. Peterson released over 200 recordings, won eight Grammy Awards, and is considered one of the greatest jazz pianists of all time. 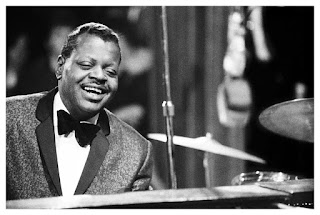 This video is especially eye-opening, as Oscar Peterson is such a unique voice in jazz - yet he can pinpoint the style, sound, and framework behind all the greats. In this way, he showcases how much research and work goes into every phrase - everything he plays has care and meaning.

What's also special about Oscar Peterson is his jubilance with everything he plays - in fact he even once quoted: "I believe in using the entire piano as a single instrument capable of expressing every possible musical idea."

To learn more about Oscar Peterson and his career, listen to the NPR Jazz Profile, "Oscar Peterson: Piano Master."

Final Thoughts:
Even the masters were once students - and it is inspiring to know that they never stop learning! Because, even when you conquer one musical idea, there are still infinite possibilities for the imagination.

Since September 2015 I have been the JazzBoston newsletter writer-editor. Please sign up for the monthly newsletter to learn more about the Boston jazz scene.